What happens when social panics are weaponized in order to create and persecute a leper-class in our society? Nothing good, according to history. But if that is so, then why do we keep doing it?

Let’s examine some examples of how social panics have been weaponized in America by revisiting the Salem Witch Trials of 1692, the “Red Scare” of the 1950s, and the “Gay Plague” in the 1980s. Perhaps they can shed some light on our current period of social hysteria surrounding sex offenders. 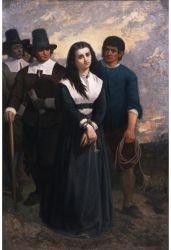 Most of us have heard about the Salem Witch Trials, the sordid episode of 17th century American history in which 19 people were executed by hanging and over 200 people imprisoned. That period of American insanity followed a time of widespread panic in Europe, during which tens of thousands of people – mostly women – were accused of witchcraft and executed.

“King William’s War” against France (1689) had caused many political and war refugees to pour into the Salem, Massachusetts area. Those immigrants included Caribbean slaves and other foreigners from French-speaking regions. The first three women to be accused of witchcraft were Tituba, a Caribbean slave; Sarah Good, a homeless beggar; and Sarah Osborne, an elderly impoverished woman.  This set the tone for future social panics which appeal to deep-seated biases and hate targeting racial minorities, immigrants, poor people, and the homeless. 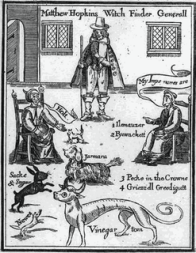 In 1692, authorities formed special investigative units and introduced new laws and rules of evidence which allowed for “spectral evidence” to be accepted in court. This 17th century “junk science” allowed  dreams to be used as evidence to indict and jail a 4-year old child named Dorothy Good after aggressive interrogations were used to elicit a “confession” from the child. Dorothy escaped execution but her mother did not, and the trauma of her imprisonment is said to have driven the child insane.

It wasn’t until the Governor’s own wife was accused of witchcraft in 1693 that the hysteria began to subside and was exposed as a weapon used to persecute political opponents and society’s “undesirables.”  Governor William Phips dissolved the special courts, disallowed spectral evidence, and pardoned dozens of surviving victims of persecution.

One of the catalysts for this hysteria was a resentment and fear of outsiders, refugees, and immigrants. The targets were initially poor, uneducated, and disenfranchised. But as the hysteria grew, it began to target even young children, well-connected, and the wealthy. Eventually, no one was safe from accusations of being in league with the devil. Special dispensations, junk science, new laws, and humiliation were all weaponized to slake the public’s thirst for scapegoats.

Fast forward some 260 years to the 1950s when, in the aftermath of the Second World War, Americans obsessed upon their fears of the Cold War. The Nazis had been soundly defeated and America needed a new boogeyman upon which to focus. Once the Soviet Union conducted their first test of an atomic weapon in 1949, those fears exploded into a full-blown social panic known as the “Second Red Scare.”

President Dwight Eisenhower, responding to widespread fears that communists were undermining the nation, expanded the “loyalty” programs enacted during President Truman’s administration. Those policies supported the firing of suspected communists in government and removing the process for appeals in those cases. From 1951-1955, the FBI operated a secret program that targeted teachers, lawyers, activists, entertainers, labor unions, politicians, and others suspected of having communist leanings and worked to ensure they were fired from their jobs and blacklisted in their industries. In 1954, J. Robert Oppenheimer, the scientific director of the Manhattan Project (which built the first American atomic bomb) was stripped of his security clearance amid rumors that he was a communist. 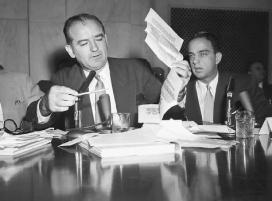 The Communist Control Act was passed in 1954 with practically no debate and the overwhelming support of both houses of Congress. It outlawed the communist party and stated that they were “not entitled to any of the rights, privileges, and immunities attendant upon legal bodies.” Many states enacted even more extreme laws to fight the “scourge of communism.” Michigan passed a law that punished “subversive propaganda” with life imprisonment. Tennessee went a step further, enacting the death penalty for “advocating the overthrow of the government” – which was understood to be a “basic tenet” of communism. Texas considered, but was ultimately unable to pass, a law demanding the death penalty simply for being a member of the Communist Party.

Cities took a similar tack. Los Angeles, CA banned communists from owning firearms. Birmingham, AL and Jacksonville, FL literally banned communists from being within their city limits. The American Civil Liberties Union (ACLU) was no help against the anti-communist hysteria, preferring to distance themselves as far as possible from anyone targeted during this period.  In 1940, the organization went as far as to force out one of their founding members, Elizabeth Gurley Flynn, for being suspected of being a communist.

The anti-communist hysteria was based upon three patently false assumptions.  First, there was a belief that every communist was – by definition – dedicated to the violent overthrow of the government. Second was the belief that communism was a form of socio-political leprosy and that simply being exposed to communism automatically made someone a communist. This leper analogy also meant that once a person was assumed to be a communist, they would always be a communist. There was no known “cure” and no allowances were made for the possibility that someone could change their mind, switch parties, or become “rehabilitated.” Third and finally, under the direction of J. Edgar Hoover, the FBI actively promoted the myth that communists were homosexuals and sexual deviants.  Ironically, recent history has revealed that J. Edgar Hoover was, himself, likely one of those so-called “sexual deviants.”

The striking parallels between the myths used to persecute suspected communists during the Red Scare and the current mythology of “striking and high” recidivism rates and the assumption of “incurability” being used to persecute people on sexual offense registries is thought-provoking, to say the least. 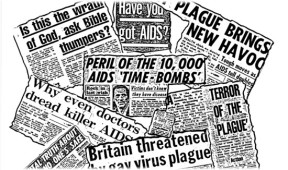 Move forward a generation in time to 1982, and you’ll see the acronym ”GRID” being discussed in the New York Times.  GRID stood for “Gay-Related Immuno-Deficiency,” which is how many researchers were referring to what we now call Human Immunodeficiency Virus or HIV. In the early 80s, it was being framed primarily as a “gay cancer” or the “gay plague.”

In a press conference in 1982, President Ronald Reagan’s press spokesman Larry Speaks was asked by reporter Lester Kinsolving about the outbreak which, by that time had killed almost 1000 people:

Lester Kinsolving:  Does the President have any reaction to the announcement by the Center for Disease Control in Atlanta that A-I-D-S is now an epidemic in over 600 cases?”

Larry Speakes (appearing dumbfounded): “A-I-D-S? I haven’t got anything on it.”

Lester Kinsolving: “It’s known as gay plague.” (The press pool dissolves into laughter.) “No, it is. It’s a pretty serious thing, one in every three people that get this have died, and I wonder if the President is aware of this?”

Larry Speakes: “I don’t have it,” he says, “Do you?” (The press pool again breaks into laughter.)

It wasn’t long before the outbreak was being blamed on promiscuity and drug use among the gay population. The Center for Disease Control’s incredible claim that gay men had a median number of 1160 lifetime sex partners obviously did nothing to dispel that notion. Later, once it became widely reported that the primary mode of HIV transmission worldwide was unprotected heterosexual sex, the narrative began to shift from blaming homosexuals to blaming heterosexual promiscuity among the younger generation, which was then exploited to advance an “abstinence only” political agenda.

People infected with HIV were often treated like lepers, whether or not they developed AIDS. Many people not only refused to risk any sort of physical contact with those infected, but also denied them employment, housing, or even emergency medical care. It was relatively common to hear the AIDS epidemic framed as a form divine retribution for immoral behavior. Many pontificated that anyone who was suffering from the effects of HIV undoubtably deserved whatever they got. Unfortunately, even President Reagan adopted that stance  in 1987 when he addressed the issue for the first time by remarking, “After all, when it comes to preventing AIDS, don’t medicine and morality teach the same lessons?”

By 2016, there were approximately 36.7 million people worldwide with AIDS, with over a million deaths occurring each year. Approximately 20% of the people infected with HIV in the United States are unaware that they have it. By ignoring the problem, joking about the problem, pandering to the uninformed, and stigmatizing or criminalizing it for nearly 40 years, the government has allowed HIV/AIDS to evolve from an obscure, relatively rare sub-Saharan disease to a global pandemic.

There are more than a few parallels between the so-called “gay plague” of the 80s and 90s and our current era of rampant sex offender hysteria. Both feature the creation of an entire class of social lepers who are routinely denied housing, employment, or medical care because of their status. Both eras begat the moral assumption that whatever horrors “those people” may be experiencing, they must somehow be deserving of it because of their perversity. And of course, both have revealed a disturbing trend of leveling insults or making jokes at the expense of this leper class.  We’ve literally graduated from “Those pants are so gay!” to “Do these glasses make me look like a sex offender?” Neither is a good look on society.

Are we, as a society, incapable of learning from our past mistakes? We certainly seem more than willing to keep making the same timeworn mistakes again and again, failing even to recognize in each instance that we are doing so. Is it something in our DNA as a species? Are we hard-wired to need scapegoats and boogeymen?

If so, then simply changing our harmful and ineffective sexual offense laws may turn out to be just one small step at the beginning of a long and painful journey for humanity.