Let me just start right out by saying that The Registry Report is not advocating for, condoning, or attempting to justify any of the behaviors depicted by the maps shown below.  The information contained on these maps covers sex offender populations, incarceration rates, laws governing sex and marriage, and a whole host of other fascinating infographics that just might blow your mind!  I can’t personally vouch for how up-to-date each of these maps is, nor did I attempt to validate the underlying statistics behind each of the maps.  But I did make a herculean effort to obtain the latest version of each map from the most credible sources available.

We’ll start with the most obvious map of interest, dated 2017, and from the National Center for Missing & Exploited Children.  Admittedly, this one is kind of ho-hum, unless you live in Oregon, Wisconsin, or Michigan, which have the highest percent of RSOs in the nation.

Here, we can see how Megan’s Law (a federal law requiring law enforcement authorities to make information available to the public regarding registered sex offenders) has been implemented by each of the U.S. States.  Individual states decide what information will be made available and how it should be disseminated. For example, some disseminate the information via social media platforms such as Facebook.

And then, there’s Jessica’s Law, a 2005 Florida law, as well as laws in several other states, designed to protect potential victims and reduce a sexual offender’s ability to re-offend. A version of Jessica’s Law, known as the Jessica Lunsford Act, was introduced at the federal level in 2005 but was never enacted into law by Congress. The name is also used by the media to designate all legislation and potential legislation in other states modeled after the Florida law. Forty-two states have introduced such legislation since Florida’s law was passed.  Purple denotes states enacting laws similar to Jessica’s Law.  Green indicates movement in that direction.  Yellow states are the ones moving in another direction altogether.

As long as we’re talking about putting people in jail, let’s take a look at our incarceration rates by state.  This map might give you pause if you happen to live in the deep south.  The question that this map raises is, are the people in the southern states just that much more criminal-minded than those in the north?  Or are southerners being held to a different legal standard than those in the rest of the country?

As if incarceration weren’t bad enough, here’s a map that shows the states that can continue to keep a sex offender locked up civilly after he has served the sentence imposed by a criminal court of law.

Sex offenses aren’t always about rape, molestation, and child pornography.  Depending on your state, they could be for such things as adultery, unlawful cohabitation, sodomy, homosexuality, bestiality, and even having/transmitting a sexually transmitted disease.  Let’s start with adultery:

Interestingly enough, in the state of Delaware, only a man could be charged with adultery.  In Minnesota, if one of the partners was unmarried, the law only applied to the married woman.  The law didn’t apply at all if the man was married and the woman was not.  Not a peep about who goes to jail if one or both of the adulterers are gay.

Sodomy laws have historically been used to prosecute the gay population for performing “unnatural” sex acts.  Sodomy generally refers to anal or oral sex between people or any sexual activity between a person and an animal, but it can also refer any non-procreative sexual activity.  In fact, most states do not have a legal definition of sodomy at all.  On June 26, 2003, the U.S. Supreme Court in a 6–3 decision in Lawrence v. Texas struck down the Texas same-sex sodomy law, ruling that private sexual conduct was protected by the liberty rights implicit in the due process clause. This decision invalidated all state sodomy laws, yet many of the state laws are still on the books.

Someone once said that “Anything worth doing, is worth overdoing.”  I’m guessing they weren’t talking about marriage, though.

If the marriage doesn’t work out, you may have to live apart while working on your divorce if you happen to live in any of these states:

I’ve never been a huge fan of monogamy, but this map (below) makes a compelling argument in its favor.  Those folks in Alaska and Louisiana must be some serious party animals!

Speaking of sexually transmitted diseases…  Did you know that HIV sufferers have to register as sex offenders in six states?

Speaking of the many colorful ways that a person can end up on the sex offender registry, how about marrying your first cousin?

Despite the myriad ways that an average citizen can end up on the sex offender registry, being a police officer and having sex with a person in your custody apparently isn’t one of them, at least in 35 states! 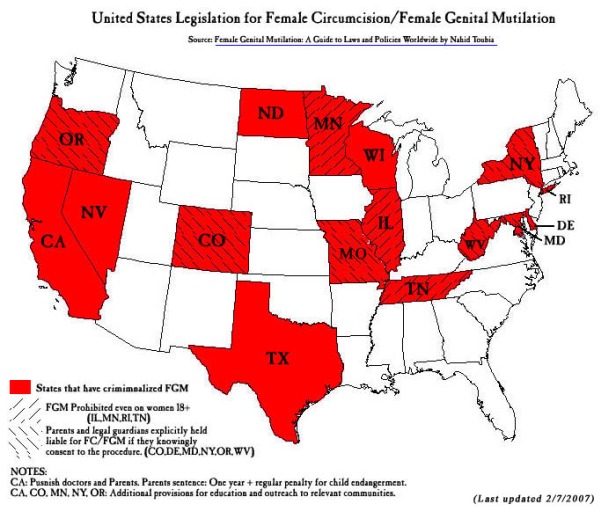 Frankly, I’m not sure how I feel about this map.  Don’t get me wrong, I love animals, but not like that. My question is, is this seriously such a problem that there have to be animal sexual abuse laws enacted by legislatures across America?  Wow! 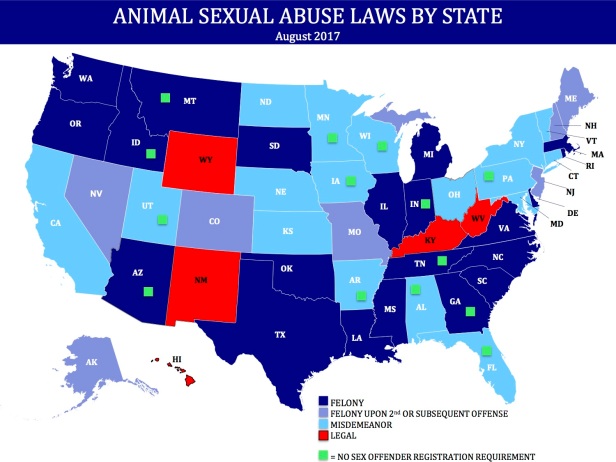 If you are still trying to wrap your head around the “Animal Sexual Abuse” laws illustrated above, consider this:  If you’re convicted of chicken-buggery or any other sexual offense, you may lose your right to vote.  And frankly, if you are into chicken-buggery, you have far greater problems than voting disenfranchisement.  Just sayin’…

And finally, if all else fails…  here’s where to take your appeal.

I hope you’ve enjoyed this little geography lesson, and perhaps even found some useful information that can make a difference in your life.