Hawaii is one of 20 U.S. states that does not currently have residency restrictions of any kind for people on the sexual offense registry. That, however, may be about to change.

Legislators in Hawaii are considering a bill that would make it illegal for any person on the sexual offense registry to reside within 1000 feet of any school, child care facility, playground, or park.  Despite how popular such legislation might be with the public, the truth of the matter is this change would be an ill-conceived solution in search of a problem which simply doesn’t exist, all in response to a news media’s effort to fan public hysteria on the matter.

An article by Hawaii News Now claimed that their reporters had scoured the state’s sexual offense registry and found 28 transient or homeless registrants listing public parks as their address. The resulting uproar from the public and politicians alike resulted in calls to “do something” about the so-called “problem.” But let’s look at just how much of a problem it really is and, if it is a problem, whether this pending legislation would do anything to fix it.

First, consider the fact that, compared to the other 49 states, Hawaii has the one of the lowest crime rates per capita overall and an extremely low rate of sexual assaults. Refer to the chart, below, excerpted from “Crime in Hawaii, Uniform Crime Reports, 2016.”  The number of rape cases has remained relatively level for over a decade, despite federal requirements enacted in 2011 and adopted by Hawaii in 2014 which greatly expanded the way Hawaii tracks and reports rapes and sexual assaults by modifying the language, expanding the definition, and including males for the first time as potential victims. Prior to 2014, Hawaii’s rape law only allowed for female victims.

The statistics cited above are expressed as rate per 100,000 population. Compared to a national average of 46.2, Hawaii’s rate per 100K was 22.2 – less than half the national average. Add the fact that 71.6% of all sexual assaults occur in a residence and that roughly 75% of all sexual assaults are committed by someone known to the victim, and it becomes fairly obvious that the “predator lurking in the park” is largely an urban myth.

In fact, despite the news media claims that 28 of Hawaii’s registrants were living in parks, the truth of the matter is, homeless registrants are required to give law enforcement an address, and it is relatively common for homeless registrants to designate a park as their domicile even if they are not actually staying there on a regular basis. Rampant tourism makes municipal parks a lousy place to panhandle, and the islands are all completely ringed by gorgeous and inviting beaches, any one of which would make a great place to camp. Giving the police a park as an address makes a lot of sense for a homeless registrant, but actually staying there all the time doesn’t.

Hawaii has one of the lowest rates of registered citizens per capita in the country, with just 3,049 registrants in a state with a population of 1.5 million. That’s 214 per 100K population. Compare that to Wisconsin, which has 435 per 100K, Michigan with 440 per 100K, or Oregon with 688 per 100K. Even more interesting is the fact that Wisconsin, Oregon, and Michigan have all had some level of residency restrictions for registrants in place for some time. While this is neither the time nor place to make the causality argument, it could easily be hypothesized that those residency requirements are a major contributing factor as to why their rates are so high.

No one is saying that having homeless registrants sleeping in parks is a good thing. It is obviously not. But here’s where we should apply some common sense to this issue. Sleeping in parks is already illegal for everyone in Hawaii, unless you have a permit to stay in approved campgrounds. The police routinely sweep and dismantle makeshift encampments at Pu‘uhonua O Waianae, Kakaako Gateway Park, Waterfront Park, Kewalo Basin, and a site near the International Airport to relocate homeless people to shelters and other areas. The problem is, many homeless shelters refuse to accept anyone who is on the sexual offense registry. 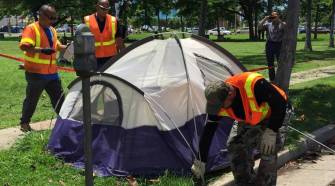 Where will those people go? Hawaii is a very small, densely populated state. Draw 1000 foot circles around every park, playground, child care facility, and school and forbid registrants from entering into those “safety zones,” and you will effectively be driving them into the sea. Or back to prison. Could it be that this has been the hidden agenda all along?

Making homelessness illegal doesn’t make it go away, it simply moves it around to create the illusion that something is being done. Forcing registrants to go underground will simply ensure that law enforcement loses track of them, which would be an unintended consequence that few have considered.

Bottom line:  Hawaii doesn’t have a “homeless registrant” problem, it has an overwhelming and critically underfunded homelessness problem.  Hawaii has the highest rate of homelessness (21.1 per 100K) in the nation, roughly three times higher than the national average of 7.4 per 100K.

When Hawaii takes steps to fix that – without excluding registrants from the solution – they’ll be on the right path.