This article was first published in the Detroit News on December 2, 2009, but is no longer posted there. The story is ten years old, but should never be forgotten.

When her 15-year-old son confessed to Lazette Cherry that he’d touched a 3-year-old girl in a sexual way, Cherry called a meeting with family members and friends the next day to discuss what to do next.

When Jamar Pinkney Jr. came into the room, Cherry testified Monday that his father asked: “Is there anything you want to tell me?”

The family left to allow the parents to talk with the boy. Then they heard screaming as Jamar Pinkney Sr. started kicking, punching and pistol-whipping his son.

The witness accounts of the boy’s final minutes came during the father’s preliminary exam Tuesday in 30th District Court, in which he was ordered to stand trial on a charge of first-degree premeditated murder in the slaying of his son Nov. 16.

Yolanda Cherry said the boy’s father replied: ” ‘You want to see some counseling?’ ” in reference to the boy’s earlier requests to get help.

“And he started to pull Jamar’s pants off,” Yolanda Cherry testified. “Jamar Jr. is saying, ‘No, Daddy, no.’ ” 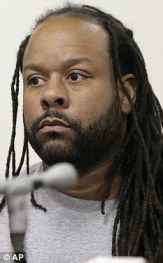 Pinkney Sr., 37, of Detroit is accused of marching his son naked into a grassy lot and killing him with a single gunshot to the head.

“His heart was still beating. I said, ‘Hold on. He’s choking on his blood,’ ” Yolanda Cherry testified. “All these police cars. Where is the ambulance? When I felt again, I couldn’t feel any heartbeat.”

Pinkney’s lawyer, Corbett O’Meara, said his client snapped after he thought the boy had raped the girl. “The admissions of the son started with blanket denials, then minimization, to moments before his death, an admission of … rape,” O’Meara said. 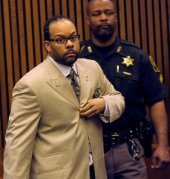 “It pushed him over the edge,” said O’Meara, who plans to file notice with the court for a defense based on temporary insanity. “None of us can say how we would react to this knowledge.”

Relatives described Pinkney Sr. at the Tuesday court hearing as a father who initially was calm during a family meeting the day of the shooting as they wrestled with what to do after the teen admitted to inappropriate contact with a female relative. A doctor, relatives have said, said there was no evidence of rape.

Lazette Cherry said her son was remorseful about what happened and told relatives that he needed counseling. She said the boy prayed before he called his father about what he had done.

An autopsy showed the teen was killed by a single bullet that entered from the front of his left cheek and lodged in his brain.

“He just shot him in the head,” Lazette Cherry, testified while Pinkney Sr., next to his lawyers, watched without emotion.

Pinkney’s other lawyer, David Draper, said the circumstances should at least result in a reduction of the charge against the father to manslaughter.

First-degree murder is punishable by a mandatory life sentence without parole. Manslaughter carries a 5-to-15-year sentence.

Pinkney Sr., a Detroit postal worker, called a friend who works for the Detroit Fire Department after the shooting and arrangements were made for his surrender at a Detroit Police precinct.

“He is devastated,” O’Meara said about his client, who he said is under the care of a psychologist in the Wayne County Jail. “He doesn’t understand how this could have happened.”

Jamar Pinkney Sr. sentenced to 37 to 80 years in prison